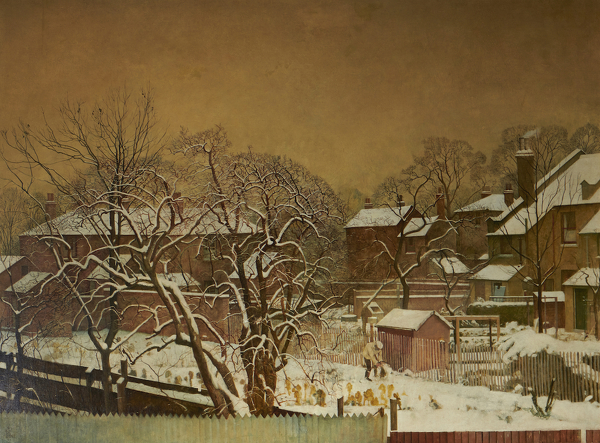 Harry Bush, Snowfall in the Suburbs – A View from the Artist’s House, 1940.

Where do artists go when the world goes to war?

Stunned by the horrors of the First World War, a generation of British
artists found sanctuary lay through the garden gate; a new exhibition
salutes this inter war golden age of horticultural art.

It seems a given, in hindsight, that the generation of British artists who were exposed to the horrors of the First World War, either at first hand or vicariously, would find some comfort in the sanctuary, harmony and possibility for renewal offered by a garden.

In the Twenties and Thirties particularly, an intriguing number of them took it up as a subject, seemingly restored – even at times exhilarated – by its continually fluctuating stew of colour, scent, breeze and birdsong.

A new selling exhibition focusing on these artists is about to open at the Garden Museum in London. It includes well-known names such as Eric Ravilious, Edward Bawden, John Nash, Charles Mahoney and Winifred Knights, plus a flock of other, no less distinguished painters whose names have, for one reason or another, vanished from accepted narratives of art.

Perhaps it seems surprising that in those interwar years, an era most closely associated with daring, avant-garde movements such as fauvism, cubism, futurism and abstraction, artists would choose to explore such an apparently conventional, cloistered subject. Even more so, that they would expand and enrich it.

But Sanctuary: Artist Gardeners 1919-1939 demonstrates precisely that: a ribbon of art that was happily oblivious to the more headline-friendly goings-on in Paris and New York. The works are often precise in feel, and exquisitely observed, though there is much more going on than meets the eye: mystical thinking, elegy and allegory are rife.

It’s enchanting, too, to learn that many of the artists took as much pleasure in having soil under the fingernails as oil paint. “Bawden, Nash and [Evelyn] Dunbar had a very strong horticultural interest,” says George Richards of Liss Llewellyn gallery, with whom the Garden Museum has collaborated for Sanctuary. “They swapped cuttings in the post, nurtured seedlings, maintained gardens. They painted the progress of those gardens from one season to another. Mahoney and Dunbar even produced a horticultural guide, with full-page illustrations, little vignettes and a text that described lovingly the plants they liked to paint and grow”

Sanctuary maps beautifully the various relationships between the artists, a kernel of whom had studied at the Royal College of Art together; a smaller number at the Slade, too. Later, some formed what amounted to mini artistic colonies: Bawden, Ravilious, Kenneth Rowntree and John Aldridge at Great Bardfield in Essex, for instance.

“I think a lot of them were very poor so it made sense to be in the country,” says Christopher Woodward, director of the museum. “Village houses were relatively cheap and they could just about afford cars.”

Mahoney was a frequent guest at Bardfield, though in 1937 he bought his own cottage in Wrotham, Kent, to which Dunbar (the two were lovers for a time, as well as colleagues), Tirzah Ravilious and Dorothy Bishop (later Mahoney’s wife) were regularly invited to set up their easels.

His garden was particularly beautiful, flanked by rose-beds, thick clouds of lavender, fruit trees and masses of shrubs. To wander among it all, recalled his daughter, Elizabeth, was to have “plants wav[ing] above your head, silhouetted against the sky in mysterious patterns”.

Indeed, Mahoney drew such joy from the sight of his garden that he set up a floor-length mirror in his living room, which perfectly reflected its ever-changing tones and textures, effectively bringing them inside for him to enjoy once daylight had faded.

Such artistry came courtesy of an obsessive streak, though. Tirzah Ravilious wrote amusingly of an occasion when Mahoney was so immersed in painting a group of his sunflowers from the perfect angle, up a ladder near the outside privy, that his guests were forbidden from using the privy at all.

John Nash, too, bought himself a place in the country, in the village of Wormingford, in Essex. He went on to illustrate the catalogues of Clarence Elliott, a garden writer who also ran the Six Hills nursery in Stevenage, to which many of the artists came in search of plants. Nash, for one, was always writing to Elliott to ask what he had that was new.

Then there were lone talents such as Harry Bush, who painted the patchwork of suburban back gardens that he could see from the windows of his semi-detached house in Merton, near Wimbledon, nearly all his life. “He had patrons, and he exhibited at the Royal Academy,” says Richards, “but he perplexed the critics. One review from the late Forties says something like: ‘he’s one of the most technically gifted artists of our generation, why on earth does he keep painting his garden?'”

The bristly snobbery that such a comment suggests was an entrenched view, one that reaches back in time to the 16th century, when the Italian academies of art established a sliding scale that placed history painting at the top, depictions of the human figure and landscape in the middle, flowers and plants most definitely at the bottom.

We are fortunate, then, that Bawden, Mahoney, Knights and Co opted to play fast and loose with classical “rules”. Perhaps they were encouraged by modernism’s rip tide (or by the garden paintings that Monet, Bonnard and Matisse had produced in the late 19th and early 20th century, which was also, interestingly, overshadowed by war or its threat), though even at their boldest, the paintings are often tinged with a sort of wistfulness.

Consider Bush, who was drawn especially to the seasonal changes he witnessed in his own and his neighbours’ gardens. He is represented in the exhibition by Summer Morning (1953) and Snowfall in the Suburbs (1940), both of which suggest the influence of 17th-century Netherlandish painting – particularly the latter – in which a tiny gardener toils under the eggnog-colour sky of a winter afternoon. Knights’s tempera studies of orchids and bluebells owe much to the work of 15th-century painter Piero della Francesca.

Why else might these artists have turned en masse to painting their gardens? “We’ve really been wrestling with that,” says Woodward, who, in his research for the exhibition, was startled by the fact that, during the First World War “all nations – German, Austrian, French, British – made gardens in the trenches. Of course, some of that had to do with sustenance, but it also gave them a form of control over their environment and a belief in or hope for some kind of future”.

Indeed, we know from their letters that British soldiers planted all sorts of flowers in the trenches: cornflowers, forget-me-nots and sweet williams (some even wrote to Kew for advice). Makeshift pots were crafted from spent artillery shells. One of the men, a Captain Stringer, recalled how the discovery of snowdrops among the ruins of Bucquoy, France in 1916, brought a lump to his throat and his groom “absolutely wept … We did not gather them up, as it seemed like sacrilege. The wee white flowers sticking up and out of chaos and desolation”.

Woodward also discovered “endless examples of soldiers saying they were fighting for very particular parts of the British landscape… often their own back gardens.” It is a notion that is beautifully illustrated by an anecdote about the poet Edward Thomas, who in 1917, when asked why he had volunteered to serve, picked up a handful of English soil, crumbled it between his finger and thumb, let it fall to the ground and replied: “Literally, for this.”

It is also important to take into account that this generation of artists were taught botany at school. At Wellington College, Nash even used it as an excuse to miss cricket, and Knights made botanical studies of the beds in the grounds at James Allen’s Girls’ School. “Every one of that generation of artists had some kind of childhood relationship to a garden, that somehow budded out late in life,” says Woodward. “It’s very rare to develop a love gardens in middle age without it having been planted in youth … it’s like a seed that lies dormant in a person.”

Has the hierarchy concerning paintings of gardens died out? Woodward thinks so. “I’ve witnessed a revival of the genre, certainly among younger artists. Our Super Nature fair [at which artists can sell their paintings] sold its 24 spaces in a couple of days. We have a waiting list for artists wanting to exhibit with us.”

Liss Llewllyn, too, reports “a slight upwards trend” in demand for paintings and drawings of gardens. “Recent museum exhibitions for artists such as Cedric Morris and Ivon Hitchens has led to a resurgence in their markets,” Richards adds. “The big names of the genre, like Bawden and Ravilious, consistently do well. I think the danger with these kinds of paintings is that people would think: twee, pretty. But there is so much more to them.”

“Artists like Mahoney,” agrees Woodward, “can give you a lifetime of emotions in a single painting.” He is particularly taken with murals in the chapel at Campion Hall, Oxford, in which the artist transposed the Garden of Eden to Twenties Sussex. “When I look at it, and I see the man in his Army greatcoat – God, it’s heartbreaking.”

This article appeared in The Daily Telegraph on 22 February 2020.