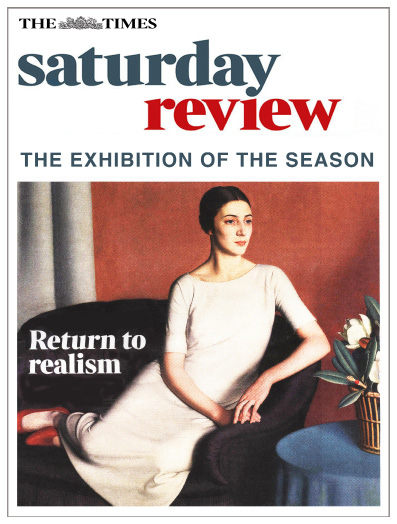 The British artists who kept it real

Between the wars realism ruled in Blighty, yet this era was soon forgotten. A new exhibition is bringing it to life again, says Nancy Durrant

When you think of the great British artists of the Twenties and Thirties, who springs to mind? Henry Moore, obviously, and his pal Barbara Hepworth, maybe her husband, Ben Nicholson. Stanley Spencer, definitely. Vanessa Bell, at a push, although her best was perhaps behind her. How about Albert Rutherston? Or Mark Lancelot Symons? Unforgettable, surely – at least, if you’d ever heard of Symons, which you almost certainly haven’t.

And yet he was a genius, at least according to Patrick Elliott, the chief curator at the Scottish National Gallery of Modern Art in Edinburgh. Symons is among 58 artists whose work is about to be showcased in a lavish exhibition at the gallery, True to Life: British Realist Painting in the 1920s and 1930s – and all but a few of them (Spencer, say, or Laura Knight, or Edward Burra) have more or less vanished from view until now. It’s not, let’s face it, a great selling point.

Elliott cheerfully agrees. “The names are completely unfamiliar to most people,” he says – and that includes the people who give the go-ahead to exhibitions. “If you go into a meeting and mention Malcolm Milne, Harold Williamson, or even someone like Gerald Leslie Brockhurst or Meredith Frampton, you get glazed looks. But if you’ve got the pictures with you, everyone understands it immediately. They’re technically brilliant, you can see that they’re going to appeal to a wide public, and no one’s ever done anything like this before.”

That might be because “realism” isn’t really a thing. These artists have never been treated as a group, says Elliott, “partly because they weren’t a group… it’s not an ‘ism’. It’s not like futurism or cubism, it’s lots of people who didn’t necessarily know each other or paint in the same style. It’s not even a style.”

Elliott has narrowed his concept by focusing on a type of draughtsmanship popular at the time, known as “the brushless style” – smooth, glossy, with a flawless finish achieved by painstaking work. Some of the paintings in the show, such as Brockhurst’s luscious 1933 portrait of his lover Kathleen Woodward, known as Dorette, took years. He worked on it for two, It comes out of a time that focused obsessively on draughtsmanship then after it was sold, asked for it back so that he could continue fiddling.

What it creates is the kind of pictures that will make anyone who has walked round a modern art gallery despairingly, thinking “but what does it mean?”, sigh with relieved pleasure. Immaculate, highly detailed and luminously beautiful, it speaks to what Elliott acknowledges is a particularly British fondness in art for both beauty “and also well-made work; you can see that they’ve spent ages doing drawings and preparing”. It comes out of an era of art education that focused obsessively on draughtsmanship.

Many of the artists here attended the Slade School of Art where, under the ferocious surgeon-turned-art-tutor Henry Tonks, the first two of the three years of study could be spent armed only with a pencil, learning to draw, and draw, and draw, and “if you even looked at or thought about Picasso, Tonks would send you home”, says Elliott. When Tristram Hillier, whose 1939 harbour scene Le Havre de Grace is in the exhibition, made some slightly cubist drawings, Tonks called it “obscene nonsense” and never spoke to him again.

The influences on display are equally traditional. As Elliott writes in the exhibition’s catalogue: “The interwar period was a period of rapid change, but being a period of change, there was value in looking back to traditions that were fast disappearing, and the British did that with relish.”

The early Renaissance held a particular fascination for, among others, Thomas Monnington, Colin Gill, Harry Morley and Winifred Knights, whose The Deluge, from 1920, will be one of the show’s high-lights. In their work can be seen shades of Piero della Francesca, Masaccio and Antonio and Piero del Pollaiuolo. Brockhurst was a Leonardo da Vinci devotee (just look at Dorette’s Mona Lisaish position in front of a landscape). Hillier valued Van Eyck above all, and other early Netherlandish painters wield their influence throughout the show. James McIntosh Patrick’s landscapes owe much to Pieter Bruegel the Elder, while the ghost of Vermeer haunts Leonard Campbell-Taylor’s 1932 Still Life of a jug and a knob of butter.

Much of the work shares with, say, Vermeer, a strong streak of the contemporary in the subject matter (not so much with the early Renaissance – too many angels). Despite their interest in the past, these artists were painting their own changing world.

A section of the show will be devoted to paintings of leisure pursuits – John Cosmo Clark’s 1933 English Country Fair, Harold Williamson’s 1939 Spray, of a startled swimmer, or his chaste Picnic from 1938, and Colin Gill’s rather more bacchanalian alfresco lunch, Allegro, 1920-2]. It was a growing part of life, says Elliott -“sport, travel – the weekend away. People have cars and bikes, there’s a lot of interest in getting fresh air. The Ramblers’ Association was created in 1935, suncream went on sale in 1936.” Rutherston’s near-six-metre folding screen depicting country pursuits will be shown, Elliott thinks, for the first time since it was bought by the V&A from the Paris International Exhibition in 1937. 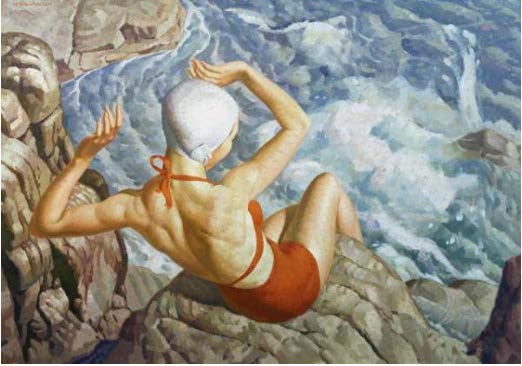 What they don’t address, however, is war. “There were articles just after the First World War, asking, ‘Why aren’t there any pictures about the war?’ “says Elliott. “Apart from those that were commissioned as war art, there’s not an awful lot, and if you look at the late Thirties you wouldn’t get much of a sense that the war was coming.”

Artists, of course, did have to make a living and buyers wanted “solace and comfort” in their art, thinks Elliott. “Who’s going to buy a picture that tells you about a war that has happened or a war that is coming?”

The works also have a curious lack of drama, probably because “that was seen as Victorian. Victorian narrative wasn’t popular, it was too signposted, it was relying too much on literary things and they wanted to be more painterly.” Only a few artists told stories, among them Spencer, a “brilliant” artist. “We’ve got him next to Clifford Rowe and Clive Branson – one isa Victorian sentimentalist [Spencer] and the others are agitprop communists and Spray, 1939 by Harold Williamson © Russell-Cotes Art Gallery & Museum. Photo credit: Russell-Cotes Art Gallery & Museum they’re basically painting the same way. But in general, big story and subject matter pictures rather went out the window.” So, it’s beautiful, well executed and not wildly challenging. Why then don’t we see this work in galleries any more? It was popular in its time, not just with the public but with museums – they paid up to £600, then a huge sum, for a work by Brockhurst at the Royal Academy Summer Exhibition. (Although not, apparently, the Tate, which relied then on only one bequest for its acquisitions and was therefore at a financial disadvantage compared with, say, Hull, Rochdale, Preston or Manchester. You can just imagine the trustees’ fury at being pipped to the post by Stoke.)

Elliott thinks their disappearance stems from the times the artists lived in – it was almost inevitable that they would fall out of fashion. “Many would have been born in the latter part of the 19th century, in some instances before electricity was invented or cars were on the road,” he says. “They were Victorian artists and yet they died in the Fifties when Sputniks were circling the world. I think it’s the period of the most radical change that has ever happened, and they lost traction. They modernised in the Twenties and Thirties, but by the Fifties and Sixties pop and abstract art had taken over and these people, in the last stage of their lives, were pretty much forgotten, consigned to minor auctions and the basements of museums.”

Elliott hopes that this exhibition will change that, and open the eyes of visitors to “the depth and range of British art. If you pick up pretty much any book on British art of the 20th century, this stuff is largely absent. Stanley Spencer gets in there, but none of the others.”

It’s easier for publishers or galleries to think in terms of styles and groups. “With this lot it’s more complicated. People will be surprised by the quality of the work, by the number of artists and hopefully enthused by the fact that here is a huge topic that this opens up.

“There are dozens of solo shows struggling to get out of this exhibition. Alan Beeton, for example, amazing artist. Hillier? When did you last see a Hillier show? You visit the Ferens Art Gallery in Hull and they’ve got two of the best Brockhurst and Framptons. You look at them and you think, well someone’s got to do a show. The amazing thing is that no one has done it before.”