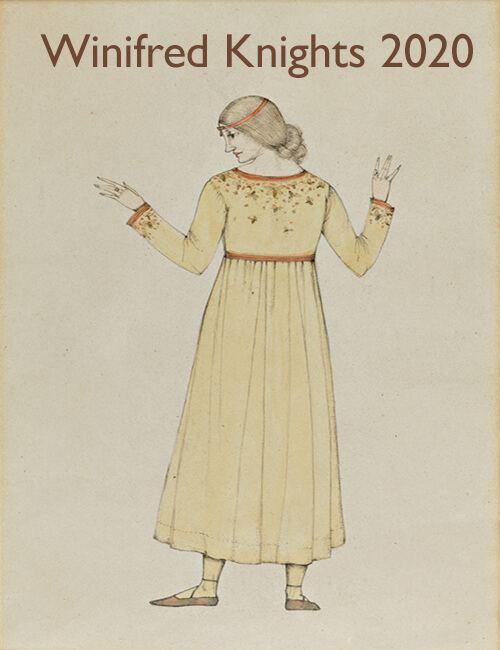 It is 100 years since Winifred Knights (1899-1947) became the first woman artist to be awarded the prestigious Prix de Rome, for her epic 6ft wide painting, The Deluge.

To win the scholarship, for which the prize was £250 a year for a three-year tenure at the British School at Rome, she had to beat three much older male artists. It was a transformative experience for the 21-year-old Knights, who gained instant fame for the breathtaking originality of her style. Girl Artist Remodels the Flood! read the front-page headline of the Daily Graphic, which described it as an example of anarchy in art, original, tragic, and inspiring and something distinctly new and compelling in its treatment of a great theme.

Today it is one of Tate Britains best-loved paintings, its strikingly modern composition continuing to cast a spell over the gallerys visitors.

Knights was born in 1899 in Streatham to a moderately prosperous middle-class family. She showed a talent for art and, at the Slade, her work depicting barefooted farm labourers, market days, munitions workers, serpentine rivers, simple draperies, fields dotted with haycocks, was heavily influenced by the Pre-Raphaelites. Though accomplished, none foretold the unsettling drama and striking palette of The Deluge.

The aim of the Prix de Rome was to train an outstanding British artist in decorative or monumental art, ie, pictorial work on a great theme, that could be applied to a public building as a mural.

The four finalists  Knights, Leon Underwood, Arthur Outlaw and James Wilkie  worked through the summer of 1920 against the clock. They had just eight weeks to complete their 6ft painting on the subject of the Biblical Deluge. Each candidate was allocated a studio at the Slade, to which they were forbidden to admit any unauthorised person except for their models.

Unlike her three competitors, who chose to focus on the principle of salvation, as represented by the Ark, Noah and his household and animals, Knights interpreted the story of the deluge in a valuable new way, centralising the despair and panic of those who will perish. In her painting, figures flee for their lives from the rising waters. Captured in mid-flight, the drama of their plight is highlighted by the ghost-like ark which sails silently past. Like a tragic chorus in an avant-garde ballet, they seem to be participating in a sorrowful dance of death. They implore the raging heavens, haul each other over walls to safety and race uphill towards higher ground.

There is nothing to dilute the horror here: no covenant sign of a rainbow, or dove to bear the message of hope. The painting is also dark, perhaps inspired by James Thomsons apocalyptic poem The City of Dreadful Night (1874), a text which we know Knights was greatly moved by, and in which figures are described as battling in black floods without an ark.

What could have prompted this young female artist, commentators pondered, to create a painting of such intensity and originality? The answer lies in Knights experience of the First World War, which, like so many women, she felt intensely and directly. Zeppelin raids over Streatham; her witnessing at first hand a devastating munitions factory explosion in Silvertown, and the death of her cousin, Ted, at Passchendaele had in 1918 caused Knights to curtail her studies at the Slade and take refuge in a farm in Worcestershire. I have got to this state that I cant let an aeroplane pass over my head without feeling terribly ill and shaky, she wrote, in a letter to a childhood friend.

The Deluge was already a familiar metaphor for the Great War. Prime minister David Lloyd George, the poet Robert Bridges and the filmmaker Michael Curtiz all made the same comparison. Knights, though, does more than make the story contemporary: she transformed the narrative into something deeply personal.

At the centre of the painting is a striking self-portrait, while other figures include her mother (cradling Knightss baby brother David, who died in 1915), her sister Eileen and aunt Millicent Murby, the suffragette. The disposition of the fleeing figures probably draws on the terror and havoc wreaked by Zeppelin raids.

Meanwhile, the overall bleakness of the setting recalls the no-mans land; the figures clambering up the soldiers going over the top. The sterility of the modern buildings  reminiscent of the concrete blockhouses scattered along the trenches  leaves the viewer in no doubt this is a present-day scene.

As winner of the Prix de Rome, Knights had to demonstrate an understanding of monumental painting extending back to the Renaissance, consequently The Deluge is filled with early Italian echoes. The terror-stricken gaze of the central figure, for instance, is a direct quote from Fra Angelicos Massacre of the Innocents (1451-52), while the fleeing figures are inspired by the monks in Vittorio Carpaccios St Jerome and the Lion (c.1502).

On September 21, Knights learnt that she had become the first woman artist to be awarded the prize. Henry Tonks, her tutor at the Slade, wrote to congratulate her: It was by far the best illustration of the subject, and a very interesting composition. The Daily Sketch published a photograph of Knights with her signature, Leonardo-inspired hairstyle and wide-brimmed hat, to celebrate her triumph. The caption read: We take our hat off to Miss Knights for looking the part as winner of the Rome Scholarship. The fact that this prize had been won by a woman, however, was not universally welcomed. People seem to be sorry for the other men, Knights lamented to Murby. Why should they be? They had just the same chances as I, and more.

Knightss eventual sojourn in Rome had a deeply positive effect on both her life and her art. During those three years, she produced two further masterpieces, The Santissima Trinita and The Marriage at Cana, and in April 1924, she married fellow Rome scholar Thomas Monnington. Her return to England in 1926, however, brought her face-to-face with the harsh realities of a male-dominated art establishment. While Monningtons career prospered, with commissions for St Stephens Hall and the Bank of England and his election to the Rome School Faculty, no such honour was accorded to Knights.

In spite of this, some retained the belief that she was one of the greatest artists of her generation, including Sir Stephen Courtauld and the Earl of Crawford, both of whom commissioned work from her.

Knights died tragically young, at 48, from an undiagnosed brain tumour. No obituary appeared and her star faded without a trace. Ironically, it was the closure of the British School at Romes London office in 1989 and the resulting acquisition by the Tate of The Deluge that marked the beginning of her resurrection. Since then, her rare and unworldly art has, thankfully, been written back into history.

Works FEATURED in this Exhibition 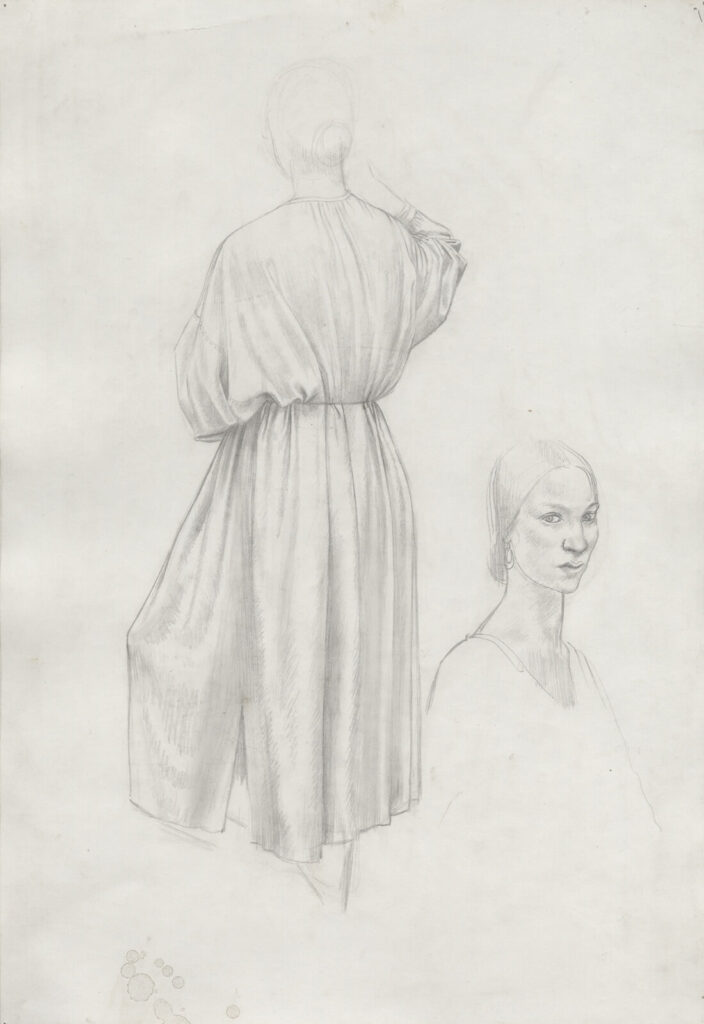 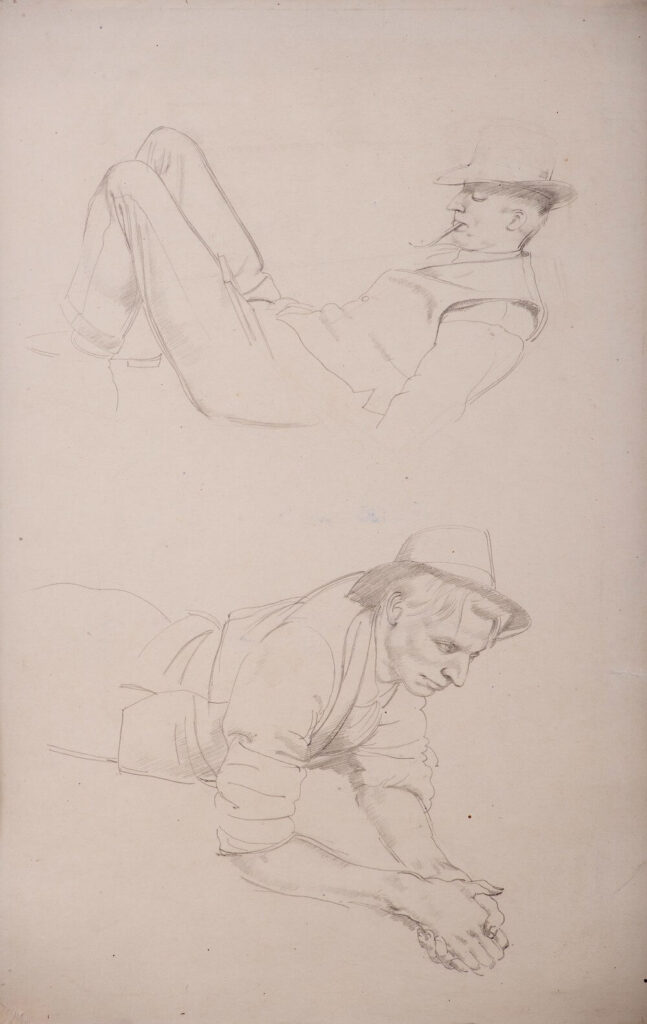 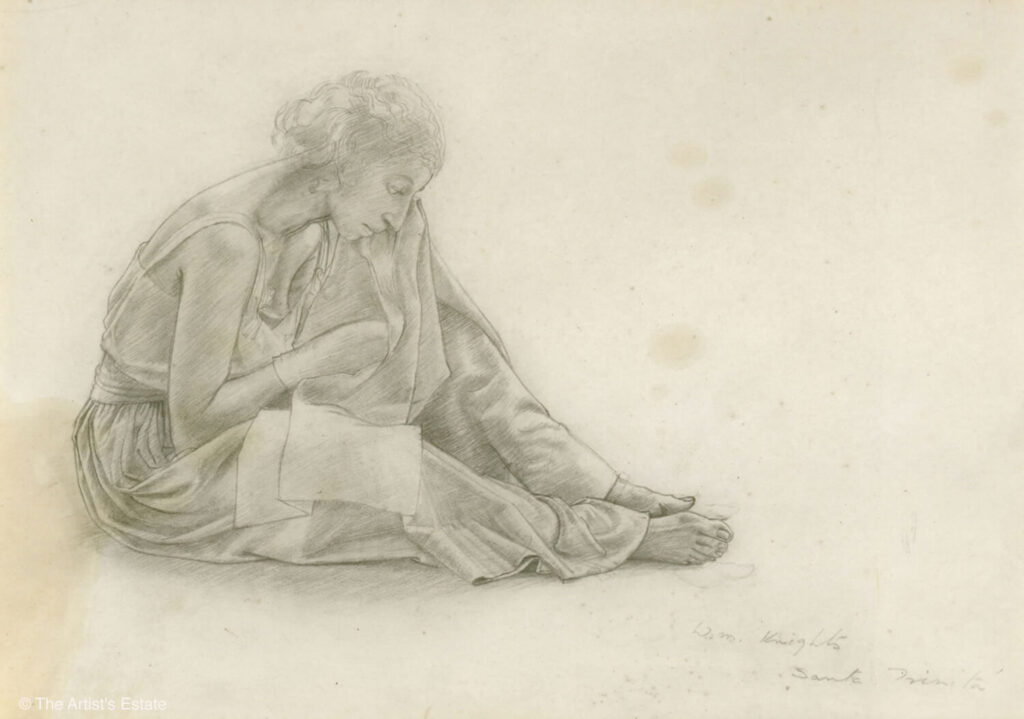 Winifred Knights
Study of a Seated Woman for The Santissima Trinita
£3,000.00
Forthcoming 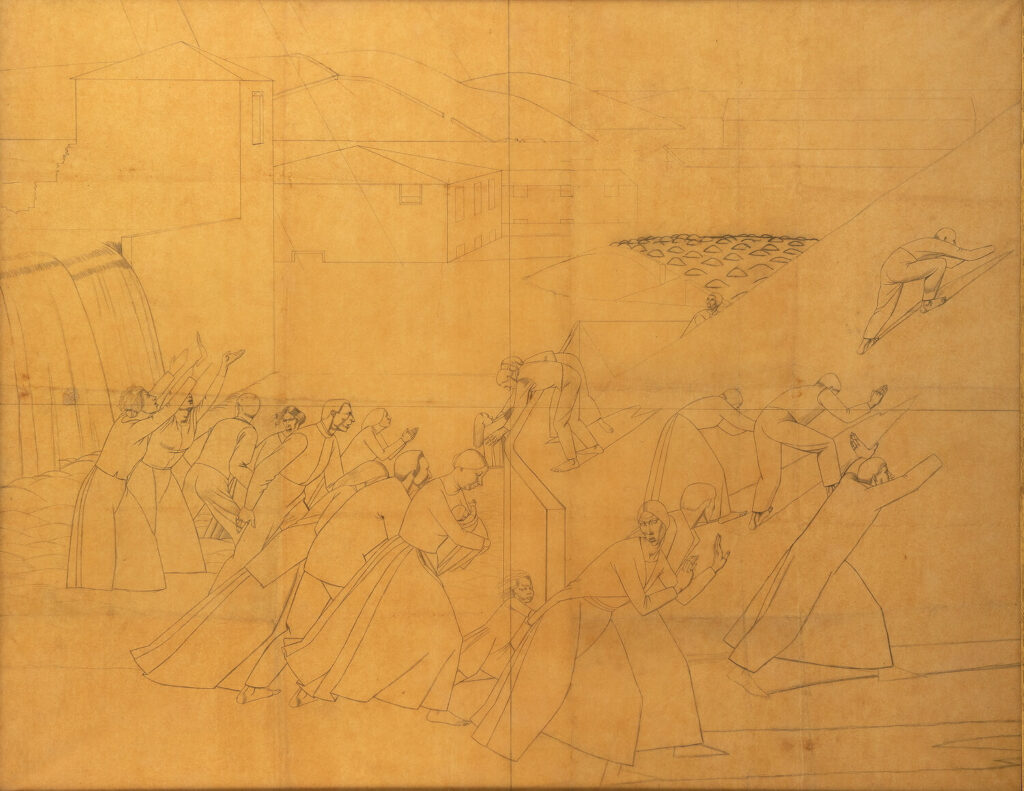 Winifred Knights
The original cartoon for The Deluge, 1920

Winifred Knights
Landscape study for Santissima Trinita, circa 1924
£18,500.00
Back to Exhibitions