Provenance:
Private Collection
This is a study for Ziegler’s An Allegory of Social Strife. The scene can be read as a polemical Allegory of the sacrifice of the working man as a victim of the ruling classes.  It depicts the artist himself on the Cross.  He is flanked on the left by pugnacious worker’s leaders (a reference to Socialism?)  and on the right men in formal attire representing the Establishment (a reference to Capitalism?).   Brow-beaten workers, under attack, fill the background.  A soldier stands guard to the Establishment figures, amongst  which is a macabre, frock coated figure whose pose and dog-collar alludes possibly to the Church.  A study for this right hand group   is inscribed by the artist with the title ‘Hell’.  Dating to the second half of the late 1920’s – a period of mass unemployment and social unrest lasting until well into the 1930s – it recalls images of the 1926 General Strike, which Ziegler would have himself lived through as a young art student.   Ziegler’s striking composition is likely to have influenced the later well known self portrait as Christ (Jesus The Jew, 1942) by Emanuel Levy. 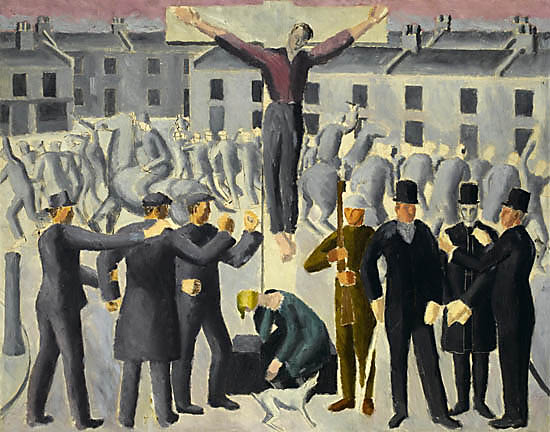 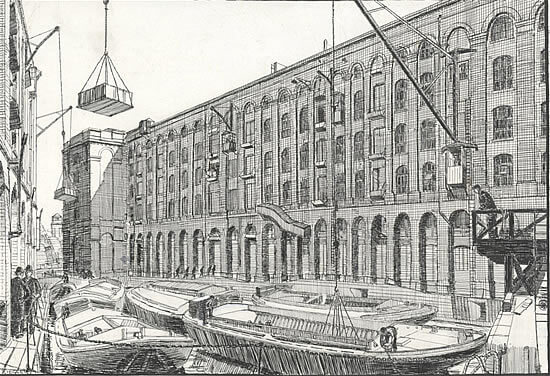 It is perhaps surprising to learn that Archibald Ziegler – an artist
little known today – had 14 one man shows during his life time held
at prestigious venues which included the Whitechapel Art Gallery
(1932), Adam Gallery (1935), Wertheim Gallery (1937), Leger Gallery
(1938) and the Ben Uri Gallery (four shows between 1950-59).

Ziegler was born in London in 1903 and studied at the Central
School of Arts and Crafts. He subsequently (from 1927 to 1930)
studied at the Royal College of Art under William Rothenstein,
whom he recalled as ‘a lively and inspiring Principal’.

The late 1920s
was a rich period to attend the RCA : the likes of Bawden, Ravilious,
Mahoney, Sorrell, Bliss and Freedman had already completed their
formative studies and, in what was to prove the golden age of the
Royal College of Art, their influence can be seen in Ziegler’s early
work. Later on the influence of his fellow Jewish artists – Joseph
Herman, Bernard Meninksy, David Bomberg, Mark Gertler, Emmanuel
Levy and Fred Ulhman, all of whom he empathised with
and wrote about with enthusiasm, came increasingly to the fore (see
‘Archibald Ziegler, Jewish Artists in England’, Studio International, vol
153-154, 1957).

After leaving the RCA Ziegler taught drawing and painting
at St. Martin’s School of Art (where he was a visiting instructor
for Figure Drawing and Painting) and Art History at Morley
College in London and for the Worker’s Educational Association.
His work was widely reproduced in publications including
Illustrated London News, Country Life, Architectural Review,
Mater Builder, Architecture Illustrated, Studio Artist, Courier,6
London Mercury, Leader, Bookman and The Artist.

His Royal Academy
exhibits (which between 1931 and 1970 numbered 12) were
mostly of his locality: Chelsea in the 1930s, Hendon and Hertfordshire
in the 1940s and Hampstead from the 1950s onwards.
In the final year of his life, 1971, Ziegler was given an
exhibition at Kenwood House, London – the first living
artist to be so honoured.
The catalogue opens with the statement
that (even during his own life time) “Zielger is an unfashionable
artist”. The text continues, “He is also a dedicated one,
to whom the latest manifestations of the avant-garde may well
be of interest but of little immediate attraction: a traditionalist,
who believes, naturally, in experiment, but who has never Hampstead Heath Centenary Exhibition / Archibald Ziegler,’ page
1.)

This statement – which might equally be used to describe
many of his contemporaries who have also slipped from view during
their own life time by virtue of being reactionary rather
than avant garde – also explains precisely why such artists are now
slowly re-emerging to re-charm the public eye. In Ziegler’s own
words: “Experiment is an important element in art, but it must be based
on continuity rather than on a violent break with all that has gone
before.” (Archibald Ziegler, quoted by John Jacobson, ‘A Hampstead
Heath Centenary Exhibition / Archibald Ziegler’.