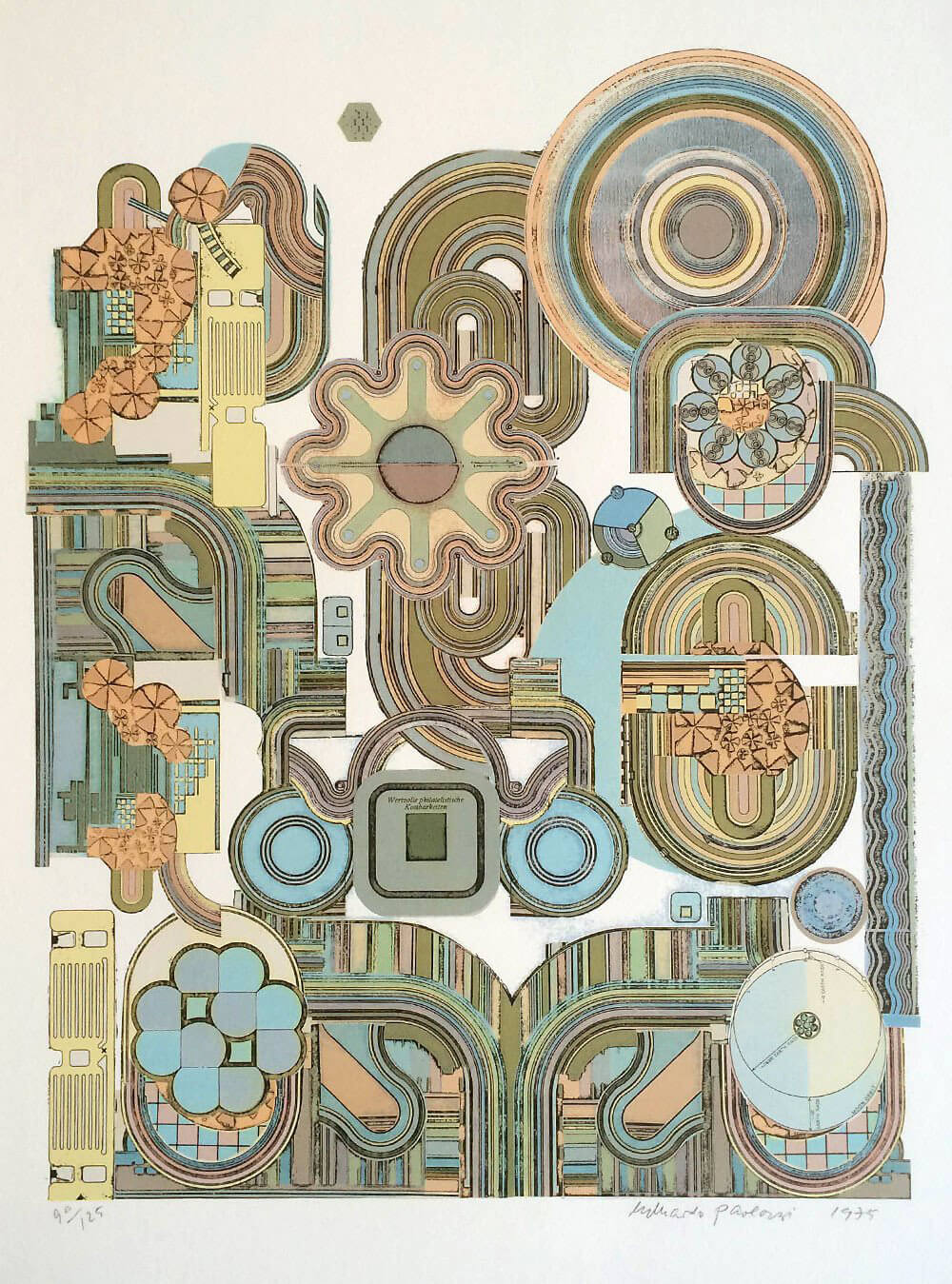 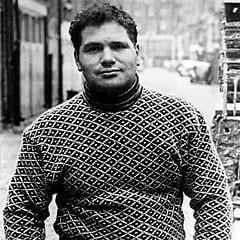 Sculptor, printmaker and collagist, born Leith, Scotland to Italian parents. Paolozzi studied at Edinburgh College of Art, 1942 and at the Slade School during its evacuation to Oxford, 1943-47. In 1947 he went to live in Paris, where he met Giacometti, among others, and was considerably influenced by Dada and Surrealism and he soon developed the approach of a collagist in two and three dimensions. By 1949 he had returned to London having held his first solo exhibition the previous year at the Mayor Gallery and in 1952 founded, with others, the Independent Group. At its first meeting at the ICA, Paolozzi projected numerous images of advertisements, comic strips, industrial machinery, etc., in random order and with no verbal commentary. This was a ‘lecture’ which was arguably to become a landmark in the history of British Pop Art. He also took part in the 1956 exhibition, ‘This is Tomorrow’ at the Whitechapel Art Gallery. His sculpture of the 1950’s combined mechanical, biological, and totemic features. In the 1960’s he worked mostly in aluminium, sometimes brightly painted, chromed or polished. He also produced collage-based prints, including the series ‘As Is When’, based on the life and work of Ludwig Wittgenstein.

He was given retrospective exhibition during his lifetime and these included the Venice Biennale, 1960, Tate Gallery, 1971 followed by another at the National Galerie, West Berlin in 1975. He was also given a Print Retrospective at the V&A in 1977. In 1979 Paolozzi was commissioned to decorate Tottenham Court Road Underground Station with brightly coloured mosaics which were eventually installed between 1983-85. Previous important commissions included the bronze doors he made for the Hunterian Art Gallery in Glasgow in 1976. In 1984 he was given yet another retrospective at Royal Scottish Academy, Edinburgh, which travelled to Germany, France and Ireland. Paolozzi taught at RCA, 1968-89, and was Professor of Sculpture at the Academy of Fine Art in Munich for nine years. He was a member of the Artist’s League of Great Britain and was made a CBE in 1968, an Associate of the RA in 1972 and a full member in 1979. In 1986 he was appointed Her Majesty’s Sculptor in Ordinary for Scotland and he was knighted two years later. His last great commission is arguably his statue of Isaac Newton located in the Piazza at the British Library, London. As a group exhibitor his work was shown at the Grosvenor Gallery, London alongside his many peers including Frink, Hepworth and Moore.
Examples of his work are in major museums around the world including the Tate Gallery, Scottish National Gallery of Modern Art,City Arts Centre, Edinburgh, Dundee Art Gallery, the Fleming Collection, Glasgow Art Gallery, National Gallery of Scotland, Edinburgh, Bolton Art Gallery, Collins Gallery, Strathclyde University, Pallant House Gallery, Chichester, Rugby Museum and Art Gallery, Stirling University Art Collection, Whitworth Art Gallery, Manchester, University of Warwick Art Collection and Manchester City Art Gallery. More recently his work has been seen in group exhibitions at KHG, Marlborough, Wiltshire.
With thanks to artbiogs.co.uk
Go to artist page