Room with a View

In a letter to The Redfern Gallery dated 1 January 1981 he said that in choosing the titles he aimed for something that would be beguiling’. His titles are typically characterised by innuendo and humour : Horrendous Rex; Bird Watching; Murphy Rules; The Land of Nod; Many titles remain enigmatic: 89th Parallel; Fete of Klee; The L9; Voices of 1431; 207 Miles Per Hour (1979); City Seconds (1979)….
His subjects range from the sacred to the profane and the mundane to the exotic; though frequently with the edges blurred: Noli Me Tangere; The Wages of Sin and Co (1979); Scenes from Provincial Life (1979); South Sea Bubble(1978); The Angel of Mons (1978). The Old Testament and Pagan world provided a ready stream of themes in which Evans’ imagination could flow freely, responding with science-fiction style reinterpretations of age old subjects: Tower of Babel (1981-82); David and Goliath; Dies Irae (1978), Venus Observed (1979); Sirens; The Witch  of Endor; Opus Surgieum; Saxons (1978); Landscape with Angels.
Many of his subjects evolve around days out: Reptile House (1979); Aquarium; The Natural History Museum (1978); Figures on a beach and sporting activities: Cricketers (1981) Pool Players (1981-2); Rugby; Skaters (1979); Gymnasts; Bike Rally. Spectacles were a favourite subject: Stadium Crowd (1988); Theatre Audience (1980); Night at the Opera; First Floor Foyer; Live at the New Roxy (1978); Live at the New Tree; The Great Corelli; Tracy’s Disco-Bar (1979); The Crystal Room (1980); Madam Noys; Street Theatre; Horror Film (1988). Fun fairs were the subject of at least three compositions: Dodgems (1976), New Improved Ghost Train (1981-2); Fundrome (1979)Nocturnal scenes were also favourite subjects: Night Flight; Night Landscape II (1979); Nocturnal (1979); Fireworks(1988); City Lights. Evans rejoiced especially in painting an often exclusively male milieu: Men’s Hairdressing (1979); Turkish Baths (1981-82); Club Night II (1988).CAT. 24 ‚Äì Life Drawing Class, pen & ink on paper, 22 x 29 ¬Ω in. (56 x 75 cm).
Roads and railways, the essential links between Evan’s two worlds of town and country, commonly provide the main subject of compositions: Central Line ‚Äì Aldgate East (1988), City Railway (1988); Anglian Rail (1979); Station Approaches (1979); A Road to Wickham; City Approaches; Mainline Bar.When in his native Suffolk, activities around Potash Farm (where he lived from 1969 onwards), provided a wealth of subjects: Potash Garden (1978); Cabbage Pickers (1981-20; Flower Garden (1981-2); The Allotment (1986); Crown Imperial (1988); Geraniums (1981-2); Gladioli, Daffodils (1986); Irises; Apples (1986); Pumpkins (1986);The Marrow Family; Cabbages; Cows Come Home (1981); Friesians; Cows XII; Piglets; Seagulls; Tour d’Anglia; Suffolk Scrap; Ruralia Mddx; Wessex; Suffolk Landscape (1979); Ipswich.
In his imagination Evans also travelled further afield: Rhine Journey; Tipperary; Scapa Flow (1977); and further still: Asia Major, Indian Landscape; Slavonic Dances; Arabian Days (1980).
The Army and Airforce were frequently in evidence in his paintings, or the subject of entire compositions: Taarget  Practice;  Sleeping  Barrack;  The  Encampment  (1986);  Army  Life  I  and  II  (1986);  Manoeuvres;  Private  army  (1981-2); Night Flight  (1981-2);  Aran  Pilot  (1986);  Ascending Aeroplane;  Fire  Over  England  (1981-2); War  in  the  Air. RAF Wattisham, which during the Cold War was a major front-line air force base was less than 20 miles from Potash Farm.
Music was a lifelong passion for Evans, both classical and pop, which he explored through the record shop he ran in London and attending concerts, especially to see Pete Gage perform. Titles including, Al Ziggy and Trev (1980), Buskers (1979); To the strains of piped Grieg; Choral Symphony (1981-2); Music Underground (1981-2); ‚ÄúDevil’s Trill‚Äù Sonata; Grosse Nachtmusik. Evans frequently alluded to the similarities between art and music and each of his works was given an Opus number.
Disclaimer:
Liss Llewellyn are continually seeking to improve the quality of the information on their website. We actively undertake to post new and more accurate information on our stable of artists. We openly acknowledge the use of information from other sites including Wikipedia, artbiogs.co.uk and Tate.org and other public domains. We are grateful for the use of this information and we openly invite any comments on how to improve the accuracy of what we have posted. 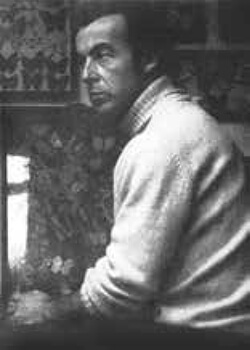 The highly distinctive large scale watercolours of David Evans  have  much in common with those of Edward Burra, who, twenty four years his senior and much admired by Evans, was clearly an important influence.  Painting the landscape of his native Suffolk, where he settled (near Woodbridge) in 1969, his brightly coloured compositions, which typically measure 30 x 50 inches, fused his local habitat with vivid fantasies inspired by imagery from contemporary life.

He was a ardent campaigner and environmentalist and the effects of pollution in the form  of landfill, industrial plants and roads encroaching into his landscape are regular motifs.  He was also drawn to metropolitan subjects – rock bands, cafeterias, excursions to museums and days out to the beach.

Born in London. he studied at Central School of Arts and Crafts with Keith Vaughan. Early in his career he showed photomontages at Gallery One and gained several commissions; these included a design for the Hollywood Room in the Observer Film Exhibition, 1956, and a mural for the Soup Kitchen, Knightsbridge.  His characteristic large-scale watercolours and gouaches date from 1967 onwards.  They were first shown in public in 1973, when his work was included in a mixed show at Deben Gallery, Woodbridge. In 1975 his work was included in summer show at Redfern Gallery, which resulted in a series of highly successful solo exhibitions at Redfern in 1979, 1981, 1983, 1984, 1986 and a memorial show in 1988. He also had one-man shows at McMur­ray Gallery from 1976-8. In 1981 he was the subject of an Anglia ITV folio documentary. In his pre-1970 London years David ran his own specialist classical record shop in the Brompton Road, and in spite of his later success, he worked in his final years as a porter at a local psychiatric hospital.  In the winter months he often found it hard to paint because the light conditions were too dull. He died at the age of 59 in a road accident. A memorial exhibition was held at Redfern in 1988.

The recent discovery of a unique group of pictures by Evans, which remained in his studio, unseen for several decades,  has allowed the opportunity to curate the first ever full retrospective, (to take place in 2017).

The exhibition will be accompanied by a 240 page book, reproducing for the first time over 100 works spanning his entire career.  The introduction will be written by the musician Pete Gage, a friend of Evans best known as the  vocalist from the pop group Dr Feelgood.