She may not sound it, but Doris Zinkeisen was half-Welsh and half-

Scottish. She began her training in Glasgow and won a scholarship to the

Royal Academy Schools where she started in July 1917. She had already

year. It represented Work’ but, along with Sims’ thirty-foot wide canvas

for the same show, was considered lost until both were discovered in

2015, rolled up on the floor of a basement packing area of the Royal

Academy. Zinkeisen’s full-scale mural has been nibbled around the edges,

especially at the top and right-hand side, but what was either a study for

it or a record of the composition survives in perfect condition, in the

form of this present smaller oil on panel. It amply reveals her flair for

design and lively sense of humour, with a clever combination of patterns,

colour repetitions and variations across its surface. The three bowlerhatted

city types, in their matching spats, are wittily echoed in the three

bananas. The ladder at the left, the cart, the wheel and donkey, initiate

the movement that drives the whole composition from left to right.

The backward gesture of the costermonger only serves to emphasise the

unstoppable momentum against the vertical intervals of the background

buildings. It is a pageant of delightful variety, but one where all are

caught up in that familiar morning rush: to work.

Commentary by Robin Simon, Editor of The British Art Journal and Visiting Professor of English at UCL. His latest book is The Royal Academy of Arts: History and Collections (2018). 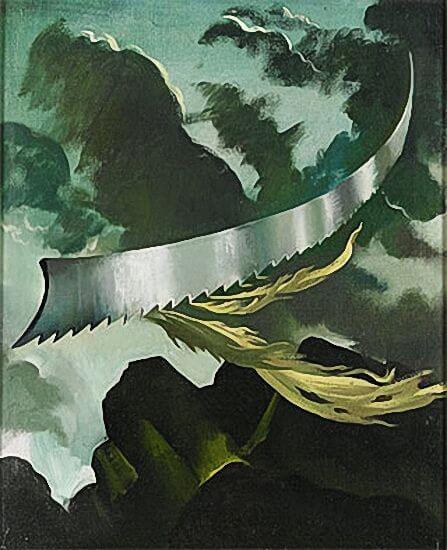 Doris Zinkeisen won a scholarship to the Royal Academy Schools

in 1917, where she quickly earned critical acclaim. Shrugging

off the outcry surrounding the inclusion of women students in

the 1921 RA Summer Exhibition, she embarked on a prestigious

career and received many notable commissions, such as stage

design work for Charles B. Cochran in the 1930s and murals for

She also exhibited in the US, Paris and London, including

published Designing for the Stage.

During WWII, Zinkeisen was employed by the British Red

Cross to record their activities in Europe. Her harrowing painting

the horrors of WW2 ‘ stands in stark contract to the vibrant

compositions she produced both before and after the war.